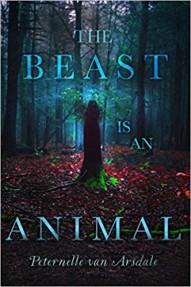 Obviously, as an author of fantasy fiction, I love fairy tales. The Beast Is An Animal is such a story; think Brothers’ Grimm. Immersing in the story was like a cool swim on a hot day. The fictional setting felt like seventeenth century New England with small changes in the spelling of names and places to suggest a landscape that was different; forest became fforest and Alice became Alys, the story’s heroine.

The book touts the story of a girl coming of age while learning to deal with good and evil, beauty and ugliness. One cannot exist without the other, but she finds it all exists, within both her own character and her immediate environment.

I didn’t work hard to study the thematic treatments Peternelle van Arsdale infused in the work, but one especially relevant statement for our times rose to the surface, at least for me. Specifically, Beast demonstrates how extremism gives birth to evil, which continues to feed on itself until everything around it becomes tainted and ripe for destruction. In reflection, I’m not quite certain what role the Beast plays in the narrative as Alys must deal with creatures who morphed from children to something sub-human. The Beast itself did not appear to have much in the way of malevolence, and in fact, it seemed to be at risk right along with the humans of Alys’ world.

If there was one disappointment, it came at the end. Alys serves more as a spectator to the defeat of evil than an active defender of good, and the heroine who saves the world for the people she loves.

Overall, van Arsdale is a competent storyteller and should be on a short-list of authors to look for again.

From Communists and Nihilists.