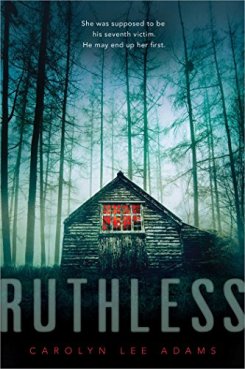 Ruthless, a realistic young adult novel by Carolyn Lee Adams is a competently told tale about a girl who struggles to survive as the target of a serial killer. Through her ordeal, the heroine Ruth is forced to strip her self-image and reassess the person she thought she was. The plot alternates between the immediacy of her predicament and chapters devoted to backstory. Though relevant, Adams oddly chooses to relay this information by increasing the narrative distance, offering the material through an unnamed omniscient voice. She squanders the opportunity to dig deep and mine the veins of gold that would have enriched the characters. Ruthless does reflect on the way choices and actions alter personality and add to baggage that will forever be a part of the soul, especially when committed by necessity. Adams also offers a distinct testament to the prevalence in our society to stand by and allow bad things to happen.

Serial killers are the true monsters among us, and if the novel falls short in any way, it’s by not having a deeper sense of what Ruth was truly up against. A hero’s dilemma is only as great as the obstacles he or she must face. By increasing the terrifying nature of the killer, it would have served to increase our fear for Ruth. As serial killers go, I thought the character, initially known to her as Ted, was somewhat mild. The reader sees the evidence of his past crimes, but we didn’t get enough sense of the wolf in sheep’s clothing, the thing that is most fearsome about these people. It’s the deadliness hidden by the face of normalcy that provides the minefield of suspense for the reader, and on that score, Ruthless didn’t quite hit its stride.

A place where books and imaginations spring into life

From Islamists, Communists, Collectivists and Nihilists.